Why consider an Electric Snow Shovel?

A soft layer of snow on the ground when you arrive at the lakehouse is beautiful—until you remember you’ll have to shovel the sidewalk and driveway before you can even get inside.

While a traditional snow shovel does the job, it can be labor-intensive and time-consuming. The best electric snow shovels can speed up the process and eliminate heavy lifting.

Electric snow shovels are designed to remove snow from sidewalks, decks, patios, and steps and are less expensive than a traditional snow blower.  They generally cost quite a bit less than a heavy-duty snowblower.

To ease your start to the weekend this winter an electric snow shovel might be just what you need.

How Do Electric Snow Shovels Work?

Instead of a scoop blade, an electric snow shovel has a large single or double turning blade that picks up snow and tosses it out of the path as you push it along the surface. An electric snow shovel does take less effort to use than a traditional shovel, but you will still have to do some pushing.

What is an Electric Snow Shovel?

Electric snow shovels are smaller more portable handheld versions of a snowblower and are great to use on decks, steps, and smaller places where a snowblower is just too big or not possible. It saves on the back strain and helps to get the job done faster.

Electric snow shovels come corded and cordless models. Each type has its own benefits and considerations.

Corded electric snow shovels offer immediate snow-clearing power. Just plug the cord into an outlet. For those who don’t want to wait for a battery to charge, which can take a few hours before they can shovel snow, a corded electric model might make more sense. Of course, corded models limit your coverage area to the length of the extension cord (usually 50 to 100 feet).  Pros: lasts longer. Cons: limited by cord length

Cordless electric snow shovels operate on rechargeable lithium-ion batteries that run for approximately 20 to 50 minutes on a single charge. Battery-powered snow shovels have a clear advantage over corded models for clearing snow in locations far from an outlet. Plus, you don’t have to drag a cord behind you. If you have a lot of snow to clear, you may need to stop and recharge the battery before you finish the job.  Pros: portable, can use it anywhere. | Cons: limited by battery charge time

What to Consider When Choosing the Best Electric Snow Shovel

The best electric snow shovel should dependably clear away the average snowfall in your area far more easily than a conventional shovel. Take these key factors into consideration when you compare models.

Area to be Cleared

How much snow an electric snow shovel can clear depends on the height and width of the intake chute.

The width of the chute determines the width of the path your electric snow shovel can clear in a single pass. Chutes range from around 10 to 16 inches wide. A wider chute means fewer passes to clear an area.

The height of the intake chute determines the maximum depth of snow the device can remove (about 4 to 8 inches). You’ll want to select an electric snow shovel with an intake chute at least as deep as the typical snowfall in your area. Some manufacturers claim their electric snow shovels can go over deeper snows with more than one pass. But if the snow is soft, these devices may sink into the snow since they’re designed to sit on a hard surface. This will just push snow over the top of the tool rather than clear it out of your path.

Electric snow shovels work similarly to snowblowers. Their horizontal auger features one or two blades. The auger rotates at a high speed and the blades scoop up the snow and blow it out of an exhaust chute. Both single- and double-blade shovels will get the job done. But the double-bladed ones may clear the snow more quickly.

Whether corded and cordless, the best electric snow shovels should be easy to operate. Just turn them on and push them along a surface to remove snow. Some have adjustable handles to fit the height of the user. Others may feature a second handle to help you push the shovel through the snow.

The attached cord on a corded electric snow shovel usually isn’t longer than 6 feet. But you can’t plug them right into a wall outlet anyway. You have to use a 12- or 14-gauge (check the owner’s manual) exterior extension cord that you will need to purchase separately.

Battery life depends on a variety of factors, including blade type and chute size. The more snow the tool handles, the more power is required, and the quicker the battery will drain. Batteries lose power with age, too. It won’t hold as much charge after a few years as it did when it was new. That’s when it’s time to replace it. 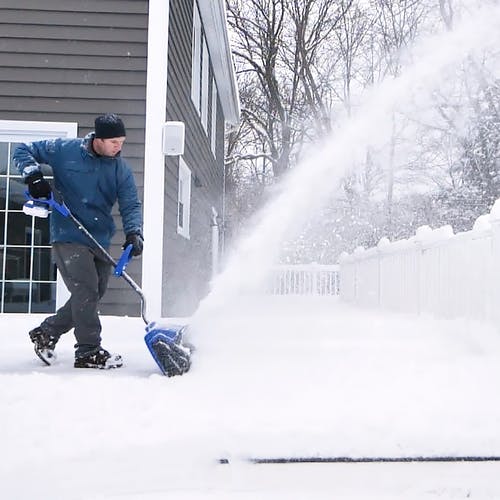 The Advantages of Owning an Electric Snow Shovel

Electric snow shovels are easier to use than a manual snow shovel and less expensive than a full-size snowblower. They expedite snow removal so you have more time for sledding, snowball fights, or staying warm indoors.

An electric snow shovel can be a handy way to remove snow when you arrive at the cottage. It is small enough to have in the back of your vehicle so that you can quickly clear a parking space and path to the door when you first arrive.

If you enjoyed this post try some of our other yard work articles.

If you’re looking to buy an electric snow shovel, naturally you have some questions.

Q. How does an electric snow shovel work?

A horizontal auger with one or two blades spins at ground level in order to pick up the snow and toss it out of an exhaust chute.

Q. How do you use an electric snow shovel?

You manually push the tool along the pavement in order for the spinning auger to pick up the snow.

Q. How do you fix an electric snow shovel?

Most electric snow shovels come with a two- or three-year warranty, so if something goes wrong during that time, contact the manufacturer. Consult the owner’s manual for instructions on basic maintenance.